Located on the western coast of Central Africa, Cameroon has been described as having all of Africa in one country for its biological and geological diversity. Mount Cameroon, in the west, is one of Africa’s largest volcanoes, reaching 13,255 feet; to the north of the country, savanna and semi-desert extend to Lake Chad; to the south, lush tropical rainforests form the northwestern boundary of the Congo Basin forests that store 40 billion tons of carbon, second only to the Amazon Basin.

Cameroon is also a country on the front lines of the fight against poverty, and its people and resources are vulnerable to a changing climate. Its rainforests alone cover approximately 46% of the national territory and account for 11% of Congo Basin forests. Cameroon is home to some of the richest biodiversity in the world. Many of its plant and animal species are found nowhere else in Africa. These include 9,000 plant species, 910 bird species, and 320 mammal species. Cameroon’s people represent an incredibly diverse, vibrant and resilient culture, and are connected to the land through agriculture and forest ecosystem services.

Ebony has long been a highly respected tonewood among makers of stringed musical instruments. Its density, durability, and dark color uniquely suit it for guitar and violin-family fingerboards, along with other instrument components such as piano keys. For many years the musical instrument industry has provided a reliable, high-value market demand for ebony. 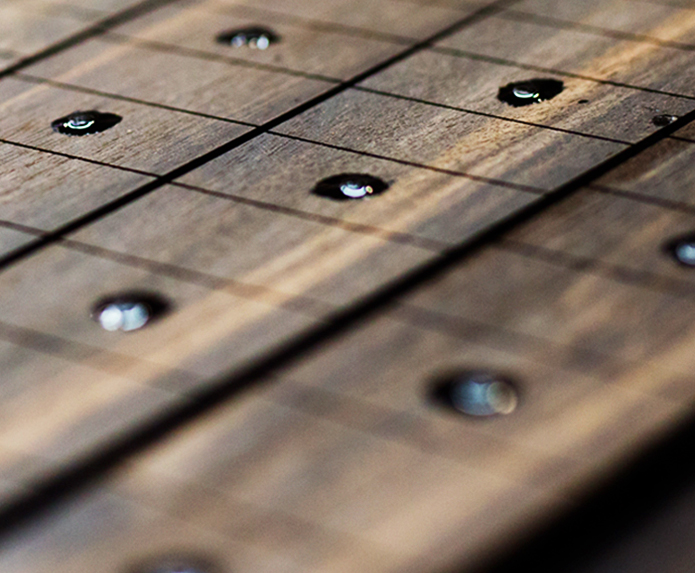 Across the musical instrument industry, there has long been an aesthetic standard of ebony fingerboards that feature uniformly jet-black color. This standard led to a wide discrepancy in market value between all-black ebony and ebony wood featuring lighter coloration, even though the differences won’t impact a fingerboard’s function.

Because tree cutters were offered considerably less money for ebony with coloration compared to the jet-black wood, for years felled ebony trees featuring coloration were simply left to rot on the forest floor. This was compounded by the fact that the majority of ebony trees feature coloration, which meant that many trees were being abandoned. This practice was unknown to others in the supply chain.

When we discovered this, we immediately opted to accept more colored ebony into the factory and to pay a more lucrative price for that grade in order to reduce waste in the forest. It also led Taylor Guitars and Madinter to spread this knowledge across the musical instrument industry in order to promote broader adoption of variegated ebony among other builders and customers. Taylor also began to feature fretboards with marbling or smoky coloration more prominently on premium models within its guitar line in an effort to promote greater acceptance in the market. This message of respecting the environment and embracing what the forest provides has resonated with consumers, who take pride in owning instruments that feature unique visual character. Other highly variegated ebony is cut into bookmatched back and side sets for guitars that promise to make visually gorgeous instruments.